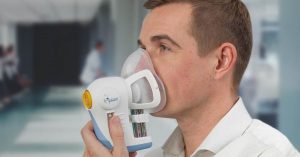 Identifying malignant mesothelioma prior to diagnosis can be difficult – especially due to the amount of time it takes the diseases’ symptoms to become apparent. To better aid with detecting the asbestos-related disease, a UK-based medical manufacturer has announced the start of clinical trials for their new disease breathalyzer – the Owlstone’s Breath Biopsy®. In both Canada and the United States, the International Association of Heat and Frost Insulators and Allied Workers (IAHFIAW), whose members are knowingly at risk for the malignant mesothelioma, has partnered with the Cambridge based Owlstone Medical for such trials.

President of the Insulators Union, James McCourt, stated, “The population of those who have been exposed to asbestos and are at risk of having an existing early-stage disease or developing malignant mesothelioma later in their lives includes a substantial portion of our membership. The long-term health of our members is of primary importance to the IAHFIAW, and we are confident that our partnership with Owlstone Medical will provide significant advances in the early diagnosis of this disease”. The optimism McCourt shared could provide many others with new hope in the future of early-diagnosis for the rare disease.

lA study carried out with the assistance of trade union members

According to a company-issued press release, the test will utilize the device to analyze the different chemicals found on IAHFIAW members who have documented exposure to the carcinogenic material and have been confirmed (through both histological and radiological testing) of having malignant mesothelioma. The breathalyzer will be used to identify volatile compounds found in the breath of participants. Once completed, a blind study to determine whether having those biomarkers present is predictive for the disease will be conducted. The study, which is predicted to last for three years, is partially funded by an asbestos non-profit group.

An earlier diagnosis may lead to improved prognosis

Many of the challenges faced throughout mesothelioma is a factor of late-stage diagnosis. The study’s ultimate goal is to come up with a way to test those who are a known risk of malignant mesothelioma as a result of previous asbestos exposure, as well as to gain the capability of diagnosing patients at a much earlier stage in their disease progression. By doing so, this can provide more effective treatment and a longer life expectancy.

Why an Early Diagnosis is Critical?

An early mesothelioma diagnosis is essential to patients in many ways. The first, it allows physicians to get a clear understanding of the stage of the disease. Stage 4 mesothelioma is the latest stage of mesothelioma and therefore is the most commonly diagnosed version of this disease. However, the beauty of this new form of biopsy is that a breath biopsy is a non-invasive way to detect cancer at a much earlier stage than a conventional biopsy.

In terms of how to diagnose mesothelioma, a biopsy is one of the most accurate methods to accomplish this. It is the most typical diagnostic procedure and is used to determine the nature of a concerning lesion to see if it is cancerous or not. The beauty behind biopsies is they quickly allow physicians to determine different forms of cancers with a high level of accuracy.

The process of a biopsy revolves around a tissue or fluid sample from an area of concern being removed by a surgeon. A pathologist then removes the sample for a deeper analysis. A microscope is then used by the pathologist to observe the cells and establish whether or not cancer is present within the patient.

Why the Breath Biopsy is Important

A Breath biopsy is a critical new development as it allows a means for cancer patients to be diagnosed at a much earlier stage without any form of invasive procedure being done to take the test.

Let us run down a quick study to give a better example of why the new Breath Biopsy idea is good for patients. The new Breath Biopsy was recently used in a study by UHSM on 14 GP practices that decided to participate. University Hospital of South Manchester Trust (UHSM) gave a concentrated group of ex-and-current smokers between the ages of 55-74 a ‘Lung Health Check’. Each participating patient was given a spirometry test, the goal of a spirometry test is to observe how well a patients lung’s function. This along with a brief conversation with a nurse to discuss symptoms each patient was experiencing was included in the “Lung Health Check”. A low dose CT scan was offered to patients who were shown to be high risk.

The “Lung Health Check” test was administered to around 2,500 people. After all, was said and done 42 patients showed incidences of lung cancer. The beauty behind this study was that typically, this form of cancer is usually only diagnosed at stage 4, usually around 50%. However, around 90% of lung cancer diagnoses are made in this study were done at an early stage which allows a better hope for curative treatment for patients.

New partnerships and breakthroughs are constantly being developed. Patients diagnosed with epithelioid mesothelioma may be interested in alternative treatments like homeopathy for mesothelioma. Contact the Asbestos Cancer Organization for more information regarding the latest findings of this rare asbestos-related disease at AsbestosCancer.org today at 1-800-799-2234.

The post The “Breath Biopsy” Being Tested to Detect Malignant Mesothelioma by UK Scientists appeared first on The Asbestos Cancer Organization.